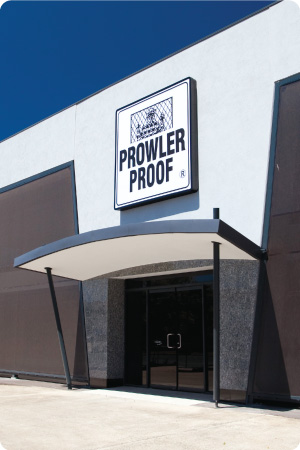 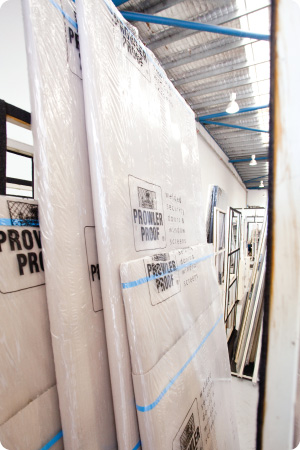 A case study from QMI Solutions:

Through its productivity improvement, focus on customers and quality, security screen manufacturer Prowler Proof received validation that it is operating at a world-class standard. But, like any successful business, the management team is keen to keep improving processes and systems to secure the company’s future in the market.

Prowler Proof, based at Banyo in Brisbane’s north, has operated since 1984, creating screens for hinged and sliding doors and windows of all sizes.

Managing Director Michael Henry joined in 1998, seven years after his father, Tasman, bought the company in 1991. Prowler Proof has since gained a reputation for introducing innovative systems and processes long before many of its competitors.

Michael Henry said Prowler Proof, which has 35 employees, was Australia’s only security door and window screen brand to manufacture custom-made welded security screens in-house. It sells nationwide to SMEs and larger companies, like Bunnings, and supplies screens for large commercial and Queensland Government projects. It exports to the USA and the Asia-Pacific region.

Long before computerised business systems were commonplace, the father-son management team realised the traditional method of receiving customers’ faxed orders, manually sending them to a production line, then putting them on job sheets risked “translation issues”. Prowler Proof manufactures all its screens to order so mistakes are costly.

Buying and supplying computers for customers

The pair realised computerisation could reduce Prowler Proof’s error rate and the company started investing in technology in the mid-1990s. But there was no point developing hi-tech ordering systems if customers did not have computers. So Prowler Proof took radical action; buying and supplying computers for its customers.

“We were keen to get customers to directly interact online. We took our first online order in 1996. Back then you still had a 56k modem and dial-up internet,” Henry said.

It was a radical business move, but has paid dividends. Henry credits the company’s early adoption of technology with its minimal (0.5%) error rate.

Prowler Proof also has a strong focus on “mass customisation” – quality is preferred over quantity. That means significant pressure to get orders right as mistakes are expensive.

“We don’t batch manufacture, which means everything is made to order; every single door and window is custom made. Every item that goes through here is unique and our guaranteed delivery time is five working days (averaging 72 hours). If it’s wrong, it gets thrown in the bin and we start again,” Henry said.

The company has a paperless workflow and an order “pull” system; enabling orders to be “pulled” through the manufacturing process to prevent bottlenecks from occurring. Prowler Proof’s systems have seen employee numbers remain relatively stable for the past decade, but productivity has grown 400%.

Despite the company’s success in a highly competitive industry, Prowler Proof is always seeking ways to improve its systems and processes. In November 2012, staff, including Henry, completed a Manufacturing Microscope benchmarking exercise. It was designed to assess key practices and show how, by improving those practices, the business could raise performance levels. The Manufacturing Microscope shows how a company compares to the world’s best and other companies in its sector, and highlights a company’s strengths and areas of improvement.

To initiate the process, Henry selected a group of employees from different levels and functions in the business – two production supervisors, a sales manager and an operational administrator.

Each team member received a benchmark questionnaire containing 52 questions, each asking for a score of 1 to 5 (5 equals best practice) for a particular aspect of the organisation’s practices and performance.

Henry, as team leader, completed a ‘contextual information’ questionnaire to give a facilitator background information. The team met a Department of State Development, Infrastructure and Planning facilitator, who led them through the questionnaire, keeping a log of consensus scores agreed during the discussion. The facilitator then analysed the consensus scores and provided feedback on how Prowler Proof compared against world’s best practice.

The company scored extremely highly (5) in processes, equipment changeover, vision and aspirations, meeting customer deliveries and housekeeping. Its focus on investment practices was also higher than many other companies in its sector.

“It was a good journey to take,” Henry said. “It makes you stop and see what you can do [and identify] ways you can improve. It was good to hear what [employees] thought about what we were already doing.”

While the benchmark revealed Prowler Proof is already operating at a world-class standard, Henry is keen to keep improving.

“When you’re innovating for a long time, you’re continuously evolving,” he said.

By completing the Manufacturing Microscope, Prowler Proof is now eligible to participate in QMI Solutions’ programs. They could include introducing Lean Manufacturing practices, a business review, and streamlining enterprise resource planning systems.

Henry has already met a QMI Solutions consultant to discuss options. He is keen to further implement Prowler Proof’s productivity improvements and increasing production line supervisors’ knowledge and skills to ensure its systems remain world’s best practice. “It’s about broadening our horizons,” Henry said. “It comes down to the basics of lean manufacturing. It’s about good housekeeping."