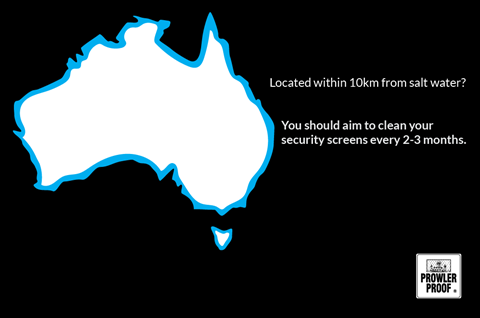 Thanks to the way they’re built Prowler Proof don’t require a strict cleaning schedule, however, it is important to take care of your investment, especially if you live in coastal areas as they’re made from stainless steel and aluminium.

Corrosion can have significant impact on homes that are built in coastal or marine environments. Prowler Proof screens are easy to clean, as they’re all in one piece, they’re welded together, powder coated and use minimal screws and rivets. They are built this way with the aim of reducing raw edge points, which are a higher risk of corrosion.

By choosing Prowler Proof, you’re choosing a product that has been made with corrosion in mind, each product has been carefully considered, designed and produced to reduce the risk. You can also be sure that each screen has been made to a consistent standard, which a rigorous quality control schedule, in one of Queensland’s largest security screen manufacturing facilities.