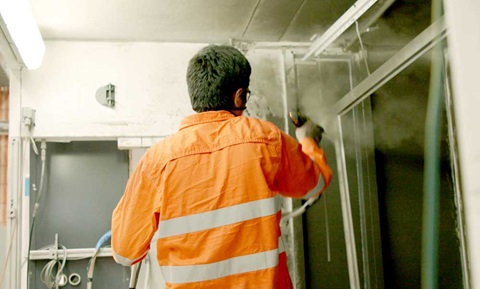 Qualicoat is Australia’s only licensing and audit system for the entire powder coating process on architectural aluminium. Qualicoat is an internationally recognised, 3rd party accreditation scheme for Quality Assurance in powder coating, and is audited by independent NATA approved auditors. The Qualicoat process includes tested and approved pre-treatment chemicals, powders suitable for Australian conditions and confirms the technical competencies and workmanship of the licenced applicator. The Qualicoat licensing system is used internationally in 39 countries.

What does being a Qualicoat applicator mean for you?

The powder coating is a key element in the appearance of a security screen. The quality of the powder coating shines through – so to speak – both short term and long term. The long term benefit is superior corrosion protection – as evidenced in the fact that Prowler Proof is the only security screen to pass the acetic acid salt spray test and the only manufacturer to offer a 10 year replacement warranty.

How do we maintain our accreditation?

Prowler Proof’s factory includes our own laboratory. Twice daily we do destructive testing of our powder coating finish. All of these test samples are then held for auditing. NATA-approved auditors conduct random audits on Qualicoat accredited applicators twice a year, and applicators may lose their Qualicoat approved status if they fail on any part of this routine testing.

and here's the proof: